Recently my youngest son had a “living history” project due for school.

The requirements of this project were to interview a person who lived through a historic event. Think big world events like – Vietnam, World War II, 911, Space Shuttle Challenger, etc.

My son decided to interview someone who lived through The Great Depression.

He interviewed my grandfather (his great grandfather), who was 5 when the biggest economic downturn in the history of the industrialized world started.

Even 80+ years later, my grandparents are still impacted from what they experienced as very young children.

I thought it would be really cool to publish parts of this interview with lessons my son (and I) learned from my grandfather.

One day … I hope that my grandchildren (and even great grandchildren) can read these tips and learn something about money and life.

While there are many tips and lessons we learned from the interview, without question the biggest one was to Save Everything. 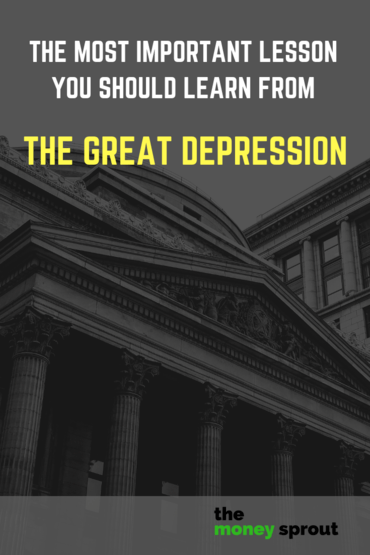 Save, Save, and … Save Some More

One of the absolute best pieces of advice I learned from my grandfather is to save everything.

When we asked him if living through The Great Depression had any impact on his current life, my grandfather answered –


I was taught to save, save, save and I still do that today. We never throw anything away and find ways to use everything we have.

My grandfather is talking about saving money of course.

But he is also referring to saving physical items as well. He made another comment later in the interview about always finding “… ways to reuse things and never throw anything away”.

For example, my grandfather talked about growing up with 7 other siblings in his family. Every piece of clothing was passed down to the next child.

I think about my boys today and how crazy it would feel to have them wearing clothes from their sister. Good thing for them she is the youngest in the family!

Part of my grandfathers advice was about saving money and always having a “rainy day fund” as he called it.

Money was a scarce resource during The Great Depression. So when the economy got better … many people who lived through that time (including my grandparents) began saving as much money as they could.

Even now into their 90’s … my grandparents always save as much cash as they can … just in case they need it one day.

And they never (ever) buy anything with credit. If they don’t have the cash to buy something … then they just don’t buy it.

One thing I have always admired about my grandfather (even when I was a young kid) was how he always bought used cars … and always bought them with cash!

Not only was my grandfather talking about saving money … he was also talking about how his family saved everything else during The Great Depression.

Like the kids clothing I mentioned before, nothing was thrown away.

He even talked about how his parents would save old and worn out leather shoes … even if they couldn’t be worn again.

They saved these old shoes so that if a better pair got a hole in them … they could cut a piece of leather off the worn one, and patch the better pair.

Towards the end of our interview, my grandfather commented about their current living situation –

Some people may think we have a lot of junk sitting around on our farm, but we were taught to keep everything and still do today. Someday we may need something or even a neighbor or other family member. So we don’t throw anything away.

If you are wondering … my grandparents live on the same exact farm where my grandfather was born and grew up over 90 years ago!

Save Everything vs. Minimalism

When it comes to saving money, I want to think I learned my frugal ways from my grandparents.

I can see the true power of saving (and investing) a large portion of your income. We are closing in on a 30%+ savings rate this year. And one day really soon we hope to push that savings rate over 50%!

When it comes to saving everything else (that isn’t money) … I’m not sure I can get on board with that concept however.

This is where the minimalist in me doesn’t agree.

Personally, I don’t want to have a lot of junk laying around.

Granted my family doesn’t live on a farm that has lots of space, but I want to simplify my life. I don’t want to get stressed about having too much stuff.

I didn’t live through The Great Depression. But I totally understand why people who did … still keep everything today.

But that doesn’t mean our family needs to live that way.

I also agree (as my grandfather also mentioned) that people today have way too much stuff.

My family has way too much stuff … and we are working on that.

Our approach to save everything (other than money) is to just not buy stuff we don’t need in the first place.

This will allow us to save more of our money and not be tempted to keep stuff lying around the house … just in case we need it someday.

Our goal (as a family) is to only buy the items we value … while saving as much of our money as we can.

Lessons from The Great Depression

I feel so fortunate to have been able to learn from my grandparents (as well as my parents).

Not only have I picked up my frugal ways from them, I have learned plenty about life in general. And even cooler is my children have learned these lessons from them too!

Even though they may have a lot of “stuff” lying around on their farm, my grandparents have put more value on things like family and experiences throughout their life.

They save everything because they don’t believe in waste … not because they want clutter around their home and land.

My philosophy is a bit different in that I would rather donate our unused items to someone who could use them. But I still believe in eliminating waste from our life.

And lastly comes saving money … I know watching how my grandparents live and save today has directly impacted my life. I have always been a frugal person.

I hope that these values will be passed down to my children and eventually their children as well.

Reducing our Transportation Expenses – A Silver Lining to the Coronavirus Pandemic