A few weeks ago, my youngest son and I had the privilege of interviewing my grandfather for a school assignment called the “Living History Project”.

The assignment was to interview a person who had lived through a historical event. The event needed to be something significant that impacted people around the world.

My son picked The Great Depression, which my grandfather (and grandmother) both lived through.

When the depression started, my grandfather was almost 5 years old and what he lived through has shaped his life … even now into his 90’s.

The interview questions we asked him and the answers he gave had many similarities to the Financial Independence movement that is growing strong today. 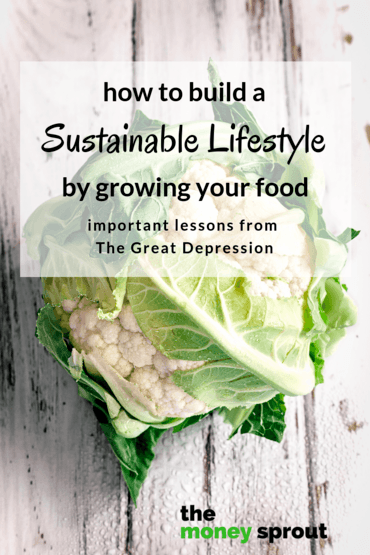 As I sat with my son during the interview, I took tons of notes for my own benefit.

Even though my grandfather has already passed down many of his frugal habits to his children and even to his grandchildren (myself included) … I wanted to capture the words he was saying.

There were so many great life lessons that he was talking about … that I wanted to write about them here on The Money Sprout.

For example, I recently published a post called – A Life Lesson From The Great Depression Everyone Should Learn – Save Everything.

This post covers one of the best lessons I have ever learned from my grandfather … which is to Save Everything.

And while I don’t agree with everything he was telling us about saving, the lessons were still powerful.

I only hope my son doing the interview can learn from my grandfather as I did … and maybe one day pass it along to his kids.

The next lesson I wanted to write about from our interview was the benefits of growing your own food.

I think growing your own food is an awesome life hack and a tool that can be used on the path to financial independence.

Growing Your Own Food – Sustainable Living

I have personally experimented with growing a small garden at our house with my daughter. Each year we get a good crop of tomatoes and some bell peppers every once in a while.

This is nowhere on the level of what my grandfather’s family grew on their farm during the depression.

My daughter and I grow food as a hobby and an activity we can do together.

My grandfather and his family grew food on their farm in order to survive.

That is a big difference.

I would like to start growing more of our own food to be honest. Maybe listening to my grandfather talk about growing their own food will inspire me to do more?

So what did we learn about growing your own food to survive during The Great Depression?

How Was Your Family Able to Feed Themselves During The Great Depression?

One of my son’s interview questions asked my grandfather how his family managed to eat during The Great Depression. Since money was a scarce resource, it was hard for people to buy simple things like food to feed their family.

“How was your family able to feed themselves during The Great Depression?”

The good news was that his family had been living a sustainable lifestyle for some time … long before the economy crumbled. His family was fortunate enough to have been growing a lot of their own food for many years, raising livestock, etc.

Here is a portion of his response –

[pullquote align=”normal”]My family was fortunate to live on a farm, so we could grow our own crops and vegetables and we had animals. We raised pigs for meat. We had chicken for our Sunday dinner and always had fresh eggs. We ate a lot of potatoes grown on the farm. My mom canned a lot of vegetables so we could eat them in the winter months like – radishes, beans, carrots, and beets.[/pullquote]

As you can see, my grandfather’s family had been living a sustainable lifestyle for some time … at least when it came to the food they ate.

They had been raising pigs, chickens, and other animals for generations. They grew most of their own vegetables. By canning food, they had systems in place for having food to eat during the cold winter months.

His family survived The Great Depression in large part by growing and raising their own food.

And if they didn’t have something they wanted or needed to cook with … they traded for it.

Trading Food for Other Goods

Not only did my grandfather and his family grow and raise their own food during The Great Depression … they used any excess they had to trade for other goods.

[pullquote align=”normal”]My family was lucky because we lived on a farm and could grow and raise most of our own food. Many other people were not as lucky as we were. We would trade hogs, livestock, and other food grown on the farm for items we didn’t have like flour and sugar.[/pullquote]

His family was resourceful during this time. If they didn’t have something they needed, they found a way to trade for it since money was scarce.

They took chickens and hogs and used them to trade with other families that had flour and other cooking ingredients not grown on the farm.

They Even Lived in Luxury at Times

One of the responses from my grandfather during the interview even talked about a few “luxury” items they made.

When my son asked him about other food they made on the farm, my grandfather responded by saying –

[pullquote align=”normal”]We made our own cheese and on special occasions made our own candy from sugar beets. We even made our own ice cream. We churned our own butter and always had fresh milk from our cows to drink.[/pullquote]

Wow … I think that is so cool. Being able to make candy from sugar beets. Making your own ice cream before there were machines to do just that. And making cheese and butter … pretty cool if you ask me.

Obviously, in today’s society things like candy and ice cream may not seem like a luxury, but back during The Great Depression they were.

The Benefits of Growing Our Own Food

Growing your own food is probably not for everyone on the path to financial independence.

Some people don’t like to be outside sweating in the summer heat tending to a garden or animals. Others may have no interest or desire to grow and raise their own food.

Personally, the thought of growing food for my family just seems cool … and there are a lot of benefits.

For example, we can grow organic vegetables. By starting a vegetable garden, we can ensure our vegetables are grown organically and know exactly where they came from. We know that no pesticides were used to grow our tomatoes and peppers.

Second, not only do we know where our food is coming from … it is just better for the environment as a whole. A truck doesn’t have to get on the road and drive 1,000 miles from Florida or California to bring us our tomatoes.

Finally, I love the thought of sustainability and providing food for our family. I think growing fruits and vegetables and raising animals is an awesome life hack that can be passed down from generation to generation.

My daughter and I plan to expand our garden starting next spring to begin growing other fruits and vegetables other than tomatoes and peppers. While we don’t have plans to grow all the food we will eat … we’d like to slowly expand what we grow.

Do you grow or raise your own food? Do you save money? What types of foods do you grow and animals do you raise?